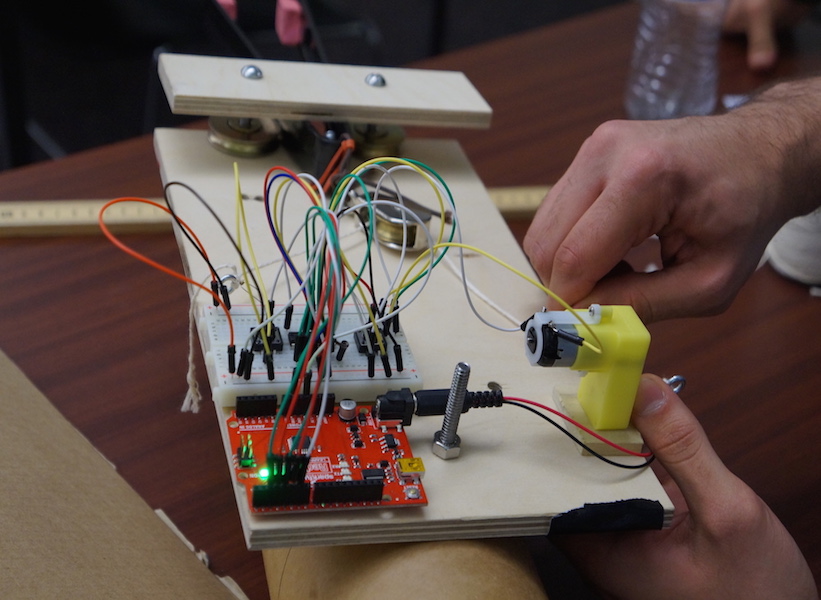 The 2015-2016 MESA USA Prosthetic Arm Competition (PAC) incorporates Arduino as a component to the arm. As cool as a robotic prosthetic arm sounds, the Arduino adds a whole new dimension of complexity.

As Student Assistant, it was my role to help with the production of our center’s prototype. Thus, I dedicated a month on developing the prototype, so let me walk you through the process I went through in learning Arduino and building a functional arm that can attempt the physical challenges our students will face at MESA Day.

The PAC prototype was developed through much research and much trial and error. The process I took in creating the prototype was based on brainstorming, designing, and finally building.

After taking note of these considerations, I started drawing prototypes, researching designs, and brainstorming materials to use. The simplest way to put the arm together was to think about it in two parts: the fingers and the base. Thinking like this helped me simplify the task, which made putting the arm together easier. The design used kitchen tongs as the fingers that were pulled back against bearings so as to close and plywood as the base for it all.

On paper the design looked great and the next step was building it. This required experimenting, failing, and repeating until the arm functioned. I tried various tongs for the motor to pull, different placings for the bearings, and different base sizes to find what works. All in all, this arm took one month to build, the majority of which was spent in trial and error.

Although going into a task like this is intimidating, having a supportive team can go a long way. I was lucky enough to have lots of help from engineers at Microsoft, coordinators at centers across the country, and fellow classmates at UW, all who provided different insights for completing this challenge and without them I wouldn’t have completed the prototype. I really advise utilizing every resource you have. Since you all will be working in teams, it would be best to split the components of the arm up. For example, if you have a team of four, two people should be in charge of Arduino components (the circuit board and programming the motors). The other two should be in charge of the mechanical aspects of the arm such as the fingers and the base of the arm. The most important piece of advice I can give is don’t be afraid to fail and go through the trial and error process; you’ll refine your arm multiple times and eventually develop something that will work. Good luck and have fun!